Dr. Lucy Peterman was not built for a messy life. A well-respected surgeon whose patients rely on her warmth, compassion and fierce support, Lucy has always worked hard and trusted in the system. She’s not the sort of person who ends up in a Twelve-Step program after being caught stealing supplies from her hospital.

But that was Lucy before the accident — before her husband and unborn baby were ripped away from her in an instant, before her future felt like a broken promise. Caught red-handed in a senseless act that kept her demons at bay, she’s faced with a choice: get some help, or lose her medical license.

Now, she’s reluctantly sharing her deepest fears with a bunch of strangers, avoiding her loneliness by befriending a troubled girl, pinning her hopes on her husband’s last gift, and getting involved with a rugged cop from her past. It’s only when she is adopted by a stray mutt and moves her group to the dog park that she begins to truly bond with the rag-tag dog-loving addicts—and discovers that a chaotic, unplanned life might be the sweetest of all…

At Hourglass Vintage in Madison, Wisconsin, every item in the boutique has a story to tell…and so do the women who are drawn there.

Violet Turner has always dreamed of owning a shop like Hourglass Vintage. When she is faced with the possibility of losing it, she realizes that, as much as she wants to, she cannot save it alone.

Eighteen-year-old April Morgan is nearly five months along in an unplanned pregnancy when her hasty engagement is broken. When she returns the perfect 1950s wedding dress, she discovers unexpected possibilities and friends who won’t let her give up on her dreams.

Betrayed by her husband, Amithi Singh begins selling off her old clothes, remnants of her past life. After decades of housekeeping and parenting a daughter who rejects her traditional ways, she fears she has nothing more ahead for her.

An engaging story that beautifully captures the essence of women’s friendship and love, Vintage is a charming tale of possibility, of finding renewal and hope when we least expect it.

Georgia Waltz has much of what most people only dream of—two healthy and bright daughters and a husband with whom she’s madly in love, even after decades of marriage; a plush Manhattan apartment overlooking Central Park; a Hamptons beach house; a driver; club memberships;fine art,. It’s only when Ben suddenly drops dead from a massive coronary while training for the New York City Marathon that Georgia discovers that her husband—a lawyer who always provided well for his family—has left them exactly nothing. Their idyllic life together, it turns out, was built on lies.

As the family attorney attempts to trace the missing money and explain the mortgaged property, and worthless insurance policies, Georgia has to come to grips with her new reality. Not only must she learn how to manage her household finances with what little income she has left, she needs to face the revelation that Ben was not the perfect husband he appeared to be. Between her efforts to protect his legacy for the sake of their daughters and coping with her critical brother and dementia-afflicted mother, Georgia is fighting to keep her spirits intact.

Meanwhile, her two daughters, now living at home, must also reevaluate their plans in the wake of their father’s death—Nicola’s globetrotting search for a career and Luey’s education at Stanford are now untenable. With no trust funds to fall back on, both young women confront the challenges of adult responsibility even as they come of age and navigate complicated romantic relationships...

Elise Sabato is proud of her husband, Brad, for serving his country...and grateful when he returns home to her. But the traumatic brain injury he suffered in Iraq has turned him from a thoughtful, brilliant, and patient man into someone quite different....someone who requires more care and attention than Elise can give while working in a demanding law firm. And when Brad ends up on his family’s farm, hundreds of miles away, she wonders where their marriage is headed.

Elise must decide between the life she always wanted and the life she seems to be living…until she finds inspiration in the most unlikely of places: a lovable dog named Jones who teaches her that when the best-laid plans take unexpected turns, sometimes you end up right where you were meant to be.

A secret tore best friends Evelyn “Button” Peters and Winnalee Malone apart. Now, nearly a decade later, a secret brings them back together.

Nine years ago Button and Winnalee began recording observations in their Book of Bright Ideas, a tome they believed would solve the mystery of how to live a mistake-free life. Now it’s 1970, a time of peace, love, war, and personal heartbreak. Button’s mother is dead and her grieving father has all but abandoned his children. Quiet, thoughtful Button has traded college for a sewing job in her mother’s bridal shop to help her Aunt Verdella raise her whirlwind six-year-old brother. In Button’s free time, she writes letters to the boy she loved from afar through high school, hoping he will come to love her as more than a friend.

Then, like that magical Wisconsin summer of ’61, Button is greeted with the wild, gusty arrival of Winnalee. Now a beautiful flower child, Winnalee is everything Button is not. She’s been to Woodstock and enjoys “free love,” but their steadfast bond of friendship is tested as Button begins to notice the cracks in Winnalee’s carefree façade. And then Winnalee’s mother arrives with a surprise that Button never sees coming, and the fiery determination to put things right in both families once and for all.

A woman who worries about carrying a .38 special in her purse, nearly drowns in a desert canyon, flies into the war in Bosnia, dances with the FBI, tells Geraldo he shouldn't put guests in hotel rooms with rats and spends time with murderers has more than a few stories to share. Gravel on the Side of the Road-True Stories From a Broad Who Has Been There is a daring and revealing adventure itself.

Claire Barnes is shattered when her husband, Greg, goes on a business trip and never returns.

Unwilling to just wait for the police to find him, Claire conducts her own investigation. Her best friend Drew helps her look for answers, but all she finds are troubling questions.

With every clue, she discovers that Greg may not be the man she thought she married.

While battling her growing feelings for Drew and raising her two young children, Claire must learn to live with the knowledge that the truth behind Greg’s disappearance may never be revealed.

Everyone has days, weeks, even months they wish they could do over—but what about an entire year? After living through the worst twelve months of her life, intensive care nurse Olive Watson is given a second chance to relive her past and attempt to discover where she went wrong.

After a year of hardships including a messy breakup with her longtime boyfriend Phil, the prospect of her mother’s remarriage, and heartbreaking patient losses at the hospital, Olive is ready to start fresh. But when she wakes up in her ex-boyfriend’s bed on New Year’s Day 2011—a day she has already lived—Olive’s world is turned upside down.

Shouldering a year of memories that no one else can recall, even Olive begins to question herself—until she discovers that she is not alone. Crossing paths with Sherry Witan, an experienced “repeater,” Olive learns that she has the chance to rewrite her future. Given the opportunity of a lifetime, Olive has to decide what she really wants. Should she make different choices, or accept her life as she knows it, flaws and all?

Snow Island is the story of two strangers who inhabit the same remote island off the New England coast. Sixteen-year-old Alice Daggett still feels the presence of her father who died five years earlier while she shoulders the responsibility for keeping the family store running. George Tibbits, a loner in his forties and the owner of the island's twin houses, returns each year in an act of homage to the women who raised him there. While George struggles to make peace with his troubled past and Alice befriends the twenty-six-year-old who tends the island lighthouse, both characters learn the hard lesson of what it means to love. This tender tale about the power of place and memory plumbs the depths of two unique and uncharted lives. As the country is drawn into World War II, George and Alice find their fates shaped by events that occur far from the small Rhode Island community that defines them.

(E-book Novella)
During the summer of 1959, ten-year-old Theresa "Tessie" Finley has her work cut out for her. Not only is she attempting to come to grips with the devastating loss and guilt she feels after she witnessed her father's drowning, her kid sister, Birdie, refuses to believe that their beloved Daddy is really gone. Tessie needs to make sure that she does before their Mom gets wind of how much "weirder" her sister's getting. Stronger, and more down to Earth than ethereal Birdie, she's always watched over her sister, so it's only natural for her to come up with a plan that she jots down on one of her never-ending TO-DO lists. If Tessie can't achieve her goals, she's desperately worried that the beautiful, but self-occupied Louise, might send emotionally fragile Birdie to the County insane asylum.

Her Daddy always told her, "A Finley never throws in the towel," so more than anything Tess wants to make him proud, but despite her resourcefulness and grit, she's smart enough to know that the odds are stacked against her and her time is running out.

Heartbreaking, funny, nostalgic, and spiritually uplifting, you'll cheer the Finley sisters on from the first page to the last of this charming novella that sets the stage for the upcoming novel, The Resurrection of Tess Blessing. 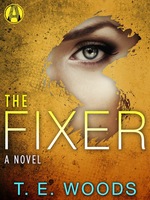 (E-book)
In this first book of The Justice series, an enigmatic vigilante known as The Fixer steps into the lives of the most depraved criminals and balances thwarted scales of justice. For those who hope to employ her, she's their last hope. For her targets, she's an inescapable date with righteous payback.  When Mort Grant, Chief of Detectives for the Seattle PD, learns the death of a prominent university faculty member wasn't the heart attack it was designed to look like, he uncovers the dark underbelly of animal research and academic politics. Where sex is as viable a currency as a million dollar grant and power is held with an iron grasp. His search for the killer puts him on the trail of The Fixer...a trail no one has finished alive.